Okay, so last weekend I was at the League of Utah Writers' fall roundup, and then Thursday I was lucky enough to attend the very first ever Book Academy conference at Utah Valley University. I should be complaining about a brain fry or something along that line, but not so much this week. Both were way fun.

I have to say, the organizers of The Book Academy did an excellent job. It was a fun conference with great classes and keynote speeches. I'm sure I'll probably go next year if they do it again. So, if you're a writer, watch for that announcement next fall and come meet me in person if you haven't already. And if you have, we'll hang out anyway.

Also, I blogged on Thursday about why it's important to be gracious and thankful toward people, especially those with whom we associate for working or writing purposes. To read more, click here.
Now, I believe there were a few winners that needed to be announced. I've recently done several book reviews that have hosted giveaways, so hang on one second while I go figure out who won.
I'm back. So, the winners of an autographed copy of "Saving Madeline" by Rachel Ann Nunes are:
NightOwlMommy
and
Suze
(Neither of them are followers of this blog=(. I think that means we need to step up the commenting on book reviews people.)
Now Joyce DiPastena, author of "Loyalty's Web" and "Illuminations of the Heart," hasn't announced the winners of her drawings yet, but keep checking back since I expect to see those any day.
And speaking of contests and drawings, it's been a few weeks since I had one of my own. As mentioned a few weeks ago, I have started accumulating stuff to give away to my faithful and loyal readers. Just because, well, I love you all and appreciate your support more than you will ever know. So let me pause a momet and dip my hand into the pile and pick something to give away this week...

And the winner is: Zion's Promise: Amidst War's Alarms 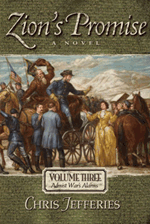 It is now 1862, and the Civil War is raging in the east. But Zion and many of its inhabitants do not escape the war. Adam Weldon, the son of the notorious outlaw Dick Weldon, is found innocent of complicity in his father's crimes. He and Laura Ould develop a mutual attraction and decide to marry, but first, Adam volunteers to drive a wagon in the Church's "down-and-back" wagon trains to bring indigent emigrants from Florence back to Zion. In Florence, Adam is asked to undertake a special mission to lead remnants of earlier Church settlements in Texas and Indian Territory to the Salt Lake Valley. Plunged into the midst of the Civil War in Indian Territory as he travels to gather the remnant Saints, Adam faces unexpected hazards as he is caught between the warring sides, and struggles to complete his mission.

Zion's Promise is an award winning book, complete with a shiny bronze sticker on the front.
To win this highly sought after book as a prize, you can do a few things, and for each one, you'll get one entry:

2. Become a follower if you aren't already.

3. Become my fan on Facebook (I'm behind the times, so I don't Twitter yet--I may never. I have enough time-wasters in my life.)

So there you have them. Four--yes, four--chances to win this amazing book. I'll take entries until Midnight on Thursday, October 1st. Good luck!

I am scheduled to review several more books in the next few months, so I've decided to make a list and put it on the sidebar in the near future. Watch for those reviews if you want some help in finding great books to read.

There are some great books being released this fall, including books by some of my favorite authors.

James Dashner's "Mazerunner" comes out on October 6th. Yahoo! Let's all go buy a copy and help him get on the NYT Bestseller List. Oh, also, his other series, "The 13th Reality" is being released in paperback sometime this month as well.

Heather Justesen's "The Ball's In Her Court" comes out October 15th (I think). Launch parties are being held the weekend of Oct 23-24th, so watch for more information on those.

The fourth "Diary of a Wimpy Kid" is also being released on October 12th, so if you have young readers, that's a must have. (I pre-ordered it.)

So, go on out and buy some books, people. Winter is on her way, and what better time to do some reading?

Until next time, write on.

and reading is an investment in those 10,000 hours towards mastery, right? That's how I keep viewing it. =]

Congrats to the previous winners!

As for my three favs/recent views, I'll go with my recent favorites of the year.
1- UP by Pixar (Just too good)
2- Cloudy with a Chance of Meatballs (great, silly fun!)
3-Angels & Demons (Yes, I'm a Dan Brown fan.)

I have no way of calculating the hours I have put in toward reading and writing but I am gonna guess that at 36 years old I am well past my 10,000 and coming up on my 20,000-Hope it all pays off.

favorite movies??? let me think-how about my favorite movies that were mocked on Mystery Science Theatre 3000.
1. Cave Dwellers
2. Legend of Boggy Creek 2
3. Eegah

I'm not surprised if you have never heard of them-pretty bad but MST3K is so funny.

You know I'm a fan and a follower and I even just blogged about your contest. I would list my three favorite movies but I'm not patient enough to try and decide which three are really deserving of that title out of the many I've loved so well.

Thanks for your comments, everyone! I'll get a winner picked and posted by Saturday.