Michael and Leesie Forever! (And contests and questions.)

Guys. Tell me you’ve heard of this book. 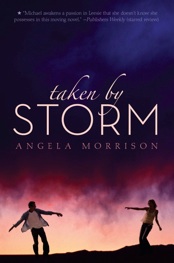 If not, I’m telling you now, if you enjoy a good love story, a heart-breaking coming of age story, a conflicted YA story, or books with unusual, but beautiful formatting, you’ve got to check out this one.

No Kissing (at least not of the French variety)…No Sex (hah! Not even close to happening anyway)…No Dating Outside the Mormon Faith (what would be the point?)…ABSOLUTELY No Falling in Love with the Wrong Boy (would ruin everything)

Leesie thinks she has her whole life planned out: get into the school of her dreams, write her poems, meet the perfect guy, and settle down. Then she meets Michael—a boy whose parents were killed in a diving accident during a terrible storm.


Michael is drowning in tragedy. And all Leesie wants is to save him. With each day, her heart hurts more. Could it be, perfect Leesie is falling from grace? Or is she just falling in love?


But if Leesie gives in to temptation, who is going to save her?

Sounds great, right? It is. Totally. And so, so romantic. Not only does Morrison explore the difference between love and sex in this heart-wrenching tale, but she delves into the importance of respecting personal beliefs and morals, and also a little about dealing with grief. There is some religion involved, but not so much as to be preachy. *

Michael and Leesie’s story is told in the format of Michael’s dive logs (he’s a scuba diver) and Leesie’s poetry and internet chat logs, giving an alternating point of view, which I appreciated because I think having both points of view make this particular story full and rich.

If ever a book has made you want to learn how to do something, or go somewhere, Taken by Storm will make you want to go to a tropical location and learn to scuba dive.(Seriously. I'm signing up this summer. No joke.)

And. If you finish Taken by Storm and haven’t had enough of Michael and Leesie, good news! Morrison has released two more volumes, taking Michael and Leesie into emotional depths that will transcend any hurricane or religious differences. 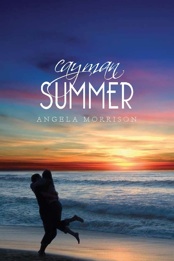 To read more about my thoughts on Unbroken Connection (book 2) and Cayman Summer (book 3), visit Star Crossed. I had a lot to say about all three.

After finishing this series (twice) there were a few questions I just had to ask, so Angela Morrison has graciously agreed to an interview. Check it out!

NG: Where were you, and what were you doing when you first met the sexy, charismatic, yet horribly, tragically sad Michael? And what about sweet, loving, gracious Leesie? How did you come to know her?

AM: I met Michael my first residency at Vermont College of Fine Arts. I was sitting in a circle of my MFA classmates, learning the mysteries of free writes from a graduate assistant. She gave us a prompt. “Remember a sound.” I started scribbling, but it wasn’t me. It was Michael. He’d been a vague, haunting idea ever since I heard about a real accident similar to the fictional one I wrote about in TAKEN BY STORM. But all of the sudden he was there on the page. Real. I could almost touch him. And I had to figure out what to do with him.

I met Leesie when Michael went on a field trip to Grand Coulee Dam. That scene is the first one I wrote with the two of them. Poor, Leesie. I let her live in my house, made her go to my high school, and even gave her the challenge of being the only LDS girl around. I got carried away, smothering her with every awful thing that ever happened to me in high school. She put her foot down. I felt awful. Cut and revised. I gave her a retro hippy suede-leather jacket and my sister’s beautiful long hair to make up for it. She was never content until I let her narrate through her poems.

NG: Holy cow! This entire series came from a writing prompt about sound? That's a fantastic story. I love knowing that. Maybe I should take writing prompts more seriously.

I hear you’re a scuba diver. I've always been interested in the sport, and thanks to Michael's story, I'm ready to sign up and get learning. If you were to go on a diving trip with Michael and Leesie, where would be your first two choices? Why?

AM: I have to confess. I’ve gone on loads of diving trips with them. Purists and my accountant would call it site research, but my husband and I took Michael and Leesie along whenever we dove. The Spiegel Grove in the Florida Keys. The Caymans. Cozumel. Thailand. The Red Sea. All amazing story material. I’d love to spend a week diving Little Cayman. Bloody Bay Wall is the best dive site I ever dove. And I’ve only been once. And then, what the heck, why not somewhere amazing, like Fiji or Tahiti. Truk Lagoon. Palau. Maybe we could spend a whole month in the South Pacific. I’ve never dove there.

NG: I figured you'd been a lot of places, otherwise there's no way Michael could see all the things he sees in Thailand and Cayman. But I did not realize you'd taken these two with you!

*scribbles note to self about traveling with future characters*

You chose a really unconventional way to unveil Cayman Summer to your readers, by blogging it rough section by section. What was your favorite part of this process? Your least favorite? Would you do it again?

AM: I wrote a new scene every day and posted it. My favorite part was the immediate feedback. I loved that. My reader’s comments not only helped me when I came to revise but inspired upcoming scenes. And I let them suggest names for the six new guys in Michael’s apartment. Those guys got them drooling. Fun amidst a serious book that had us all crying every post. My least favorite? Trying to figure out how to share the revision process. I gave up—took a break—and then posted the final version on two page tabs—that’s at http://caymansummer.blogspot.com. I loved the whole adventure. If I had a publisher who would let me do that or if I ever have stranded books again, I’d be back at it in a flash.


NG: You know, I would never have thought of doing something like that. You're one brave woman. Because of this process, what kind of influence did readers have on the final finished product?

AM: Loads. I’d been thinking through this story for so long that I had the story plotted out beforehand. That stayed the same, but things they liked and didn’t like helped me come up with twists and turns.

NG: I can see how that would happen. My critique group does that for me every week. I guess blogging it must be like having a giant critique group. But I'm wondering, do you feel the story might have ended differently had you published all three books with the same publisher?

AM: I don’t think Penguin would have ever published CAYMAN SUMMER. Razorbill didn’t ever see it, but when we submitted a proposal for UNBROKEN CONNECTION, I included a brief summary. I think CAYMAN SUMMER’s ending is one of the reasons they walked away from it. My editor left[the company], too. That didn’t help, either. The ending even made some of my readers angry. They didn’t like what happened to Michael. But that’s how I wanted to end it. And I released it myself, so I figured I could do what I wanted. That’s rare in this business.

NG: I'll say. Can we expect another excellent book from you anytime soon? Can you give us any hints or details about plots or release dates or characters?

AM: Earlier this year, I signed with a fantastic new agent, Erzsi Deak at Hen & Ink. I’ve revised the two novels that got sidelined because of my option clause with Penguin with her critique, and now the first one, MY ONLY LOVE, is on submission. MY ONLY LOVE is a historical YA inspired by my Scotts ancestors. I made me great, great, great, great grandmother’s big brother into the hottest 19th century coal miner every to leave Scotland. People who’ve read all my work say this book is my best by far. I hope to have release date for it soon. Right now, we’re waiting, waiting, waiting.

The second book is a romantic, time-travel adventure called SLIPPED. If you took Mad Max and Jane Eyre and plunked them down in Medieval Europe to save the future, you get SLIPPED. I’m putting the final touches on it now.

You can read excerpts of SLIPPED and MY ONLY LOVE at the WIP section of my website, www.angela-morrison.com.

Right now, I’m working on a musical stage adaptation of SING ME TO SLEEP with Harriet Bushman, the incredible composer who wrote the music for and arranged “Beth’s Song” and “Take me Home.”

NG: Yowsa! That's a whole lot of projects for one writer to juggle. And yay, because that means we fans won't have to wait too long for the next awesome book. And I'm completely stoked about the idea of a musical adaptation for SING ME TO SLEEP. You already know I loved that story as well. (Highly recommended, but be warned, you WILL cry at least once.)

Angela, thanks so much for taking the time to visit with me, and for writing such phenomenal stories. Can't wait to get my hands on the next one.

Angela is having a fantabulous contest in which she's giving away loads of free books and swag. Hurry over and enter now.

Purchase your copy of Taken by Storm or visit Angela Morrison's website.
I also read UNBROKEN CONNECTION and CAYMAN SUMMER, and am discussing these books today on Star Crossed Book Reviews. If your interest is piqued, come see more and join the discussion.


Okay, so I've got to know. What books have you found so unspeakably romantic that you had to immediately re-read them again?

*FYI while there isn't an excess of religion in book one, subsequent volumes contain significantly more, and religious beliefs and doctorines become a huge part of the plot in book three.
Posted by Nichole Giles at 4:00 AM

Angela is so talented. She KNOWS how to wrench a readers heart. Let's just say I read book 2 and 3 in two days. Nothing else got done until I knew how it ended with Leesie and Michael. =D

Thanks for the post, Nichole! I'm going to look those up at the library right now. Maybe I can win them too lol

Thanks so much for hosting me today, Nichole. Your questions were fun. And I loved your review.

Taffy, most libraries do have TAKEN BY STORM, but I released the other two independently, so you probably won't find those. UNBROKEN CONNECTION is available via the Kindle Store for just $2.99, and you can read CAYMAN SUMMER totally for free at http://caymansummer.com.

Wow! I had NOT heard of this book. I don't normally go for LDS themed books, but I think I will make an exception for this one. Thanks Nichole!

So glad to hear you read these books too! Isn't Angela amazing?! I kept thinking about these characters long after I was done reading the books.