Before I get started on telling you about the book, Rachelle has announced the grand prize winner for the Original Scrapbox EZ View Craftdesk. Click here to see who won, what they won, and the results of the clicks for charity drive. I nominated the Fisher House in San Antonio, so if you agree that they should receive this wonderful prize, go leave a comment about it!


And now for other important matters. 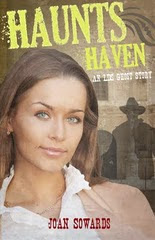 When Callie Wilford inherits a century-old inn in southern Arizona, locals tell her of a ghost who “guards” the inn. But Callie doesn’t believe in ghosts, and she plans to turn the inn into a bed and breakfast. Then things start to happen—strange, spooky things—and she begins to wonder if there is some truth to the ghost stories. If that weren’t bad enough, Callie discovers a mysterious grave in the cellar. As she confronts the inn’s tragic secrets, she also faces her lonely past and learns to embrace her heritage. But it takes a handsome cowboy and a charming rancher to prove that Callie’s long-guarded heart can love again.

This is a sweet story written in a similar style to old-fashioned ghost stories told around a campfire. Haunts Haven differs from your average every-day LDS story in that it includes ghosts, which is something I’m not sure has ever been done in the LDS market. Or, at least, not that I’ve seen.

I got my review copy along with Missing, which I reviewed last week, and was excited to read them both. Even though I’ve had tons of stuff going on, I finished each book quickly. Haunts Haven is a short, quick, read through in one sitting type book, and I enjoyed my time spent with Callie, Lizzie, James and Clay.

Best-selling author, Kerry Blair has this to say:

Haunts Haven grabs your attention from the first page and holds it into the wee hours…Joan Sowards combines the supernatural with mystery, romance, and suspense—and does it amazingly well!

I started reading Haunts Haven for it’s charm, was soon hooked on the love story, and found myself perched on the edge of my seat as the suspense kept me delightfully up past midnight.

A love story you will never forget in a tale of suspense you will want to read again and again!

To buy your copy of Haunts Haven (or one to give away as a gift), click here.

Until next time, write on!

**Yes, I got a free copy of this book, sent directly from the publisher. No, it is not signed by the author, and yes, I may someday pass it on to someone else, but I won't be selling it as has been insinuated by the creation of this idiotic law. As it happens, I love books and have a bad habit of keeping the ones I love on my shelves until I've memorized them word for word, at which point I will give them to the next book lover who will be next to memorize it. I ask you, is that a crime? I didn't think so!

I've heard great things about this book. Thanks for the review, Nichole! Merry Christmas!

Thank you for the great review!